Which tablet should I get?

“Which tablet should I get?” is a question as old as humanity itself. I can imagine cavemen sitting around a fire asking each other which tablet they should get:

“Sure, I’m already familiar with rock tablets and I do have my own hammer and chisel, but those new wood tablets look pretty good.”

“I’ve heard learning to chisel on wood is much trickier than rock, though.”

“But, the wood ones are so lightweight!”

When people ask me which tablet they should get, I respond with everyone’s favorite approach – answering a question with a question. In this case, two:

Once I have the answer to those two questions, I recommend one of the following  four options. 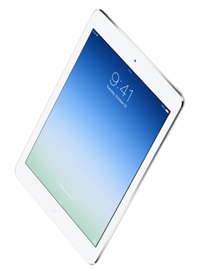 Summary
Apple (re)introduced tablet PCs to the world with the introduction of the Apple iPad in 2010. If you were like me, your first reaction was “Who cares? It’s a giant iPhone.” However, once I got my hands on it, I realized that it is a giant iPhone but, also, exactly how useful a giant iPhone can be.

The iPad is great for surfing the web and checking your email while you’re watching TV. It’s also not terrible for reading magazines, watching videos, listening to music and playing a game or two from time to time. In addition, the design feels solid in your hands and is very eye-catching, plus you have Apple’s robust App Store providing you with a variety of fun-to-use (but simple) apps.

Unfortunately, as of version 7, trying to be productive using iOS is a sloppy mess. File management is kept context-sensitive with users only being able to see files specific to the app they’re using i.e. Pages only shows Pages files. It can be tricky to take a project you’re working on – even from an Apple computer – to an iPad, make changes, and get it back to your desktop/laptop all in one piece.  Even with the recent introduction of Microsoft Office for iOS, productivity remains the iPad’s biggest weakness.

However, if what you’re looking for is a lightweight device that you can take on vacation or use to surf the web and check your email while you’re watching television, and you don’t mind paying a slight price premium for a truly well-designed product, the iPad might be right for you.

There are an incredible variety of options ranging from the base iPad Mini – which is surprisingly useful despite its small form factor – to the full-sized iPad Air – which is almost surprisingly lightweight and super thin. If you’re not familiar with how they feel or which size is right for you, I recommend you visit an Apple Store, Best Buy or other Apple retailer to get your hands on a demo model before purchasing.

What do I have?  I own an Apple iPad Air 16GB Wi-Fi. I actually preferred the new Mini but got such a great Black Friday deal that I returned the Mini and picked up an Air. 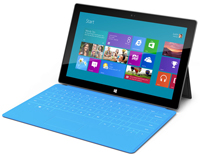 Summary
Microsoft’s Surface series (Surface 1 RT and Pro first released in 2012) tends to be the underdog of the tablet community. The first Surface was rough around the edges with a built-in stand that only had one setting and no included physical keyboard (though the commercial campaign implied otherwise).The bummer? Microsoft’s Type Keyboard (the one with real keys) will run you about $139.00.

In addition, the Microsoft App Store was underwhelming, to say the least, as developers hadn’t jumped on the Microsoft bandwagon. What the Surface did have was a sound operating system in Windows 8, good file management, and every tablet includes Microsoft Office.

The Surface 2 builds on the design of the original with a very solid body that’s thin and lightweight. The built-in stand includes a second position for easier laptop use. In addition, even the base Surface includes a USB port and video-out supporting USB hubs, mice, keyboards, game controllers and the ability to output video to a real monitor. Also, the Microsoft App Store grew a lot over time becoming more and more robust with offerings that may one day equal Apple’s and Google’s app stores.

The base Surface 2 (and original Surface 1 RT) comes with a watered-down version of Windows 8 which looks, feels and operates just like Windows 8 with one key caveat – it can only use apps specifically designed for it and not all Windows applications. To use any application you’d use with a full desktop (such as Adobe Creative Suite, Apple iTunes, etc.), you’ll need to step up to the Surface 2 Pro version which starts at a sky-high $899.00 (and still doesn’t include a keyboard, but does include a touch pen, for some reason).

If you want a thin, light-weight, solid tablet, but still want to be productive with Microsoft Office, Surface might be for you. Windows 8’s touch interface is not intuitive, meaning you’ll need to download the well-designed Windows 8 training manual to understand how it works, but once you get familiar with its gesture nuances, it’s a solid touch-based operating system with powerful productivity. You even have a Documents folder just like desktop-versions of Windows!

What do I have? I own a Microsoft Surface RT (1st generation). Again, I’m a sucker for a Black Friday deal, and it’s really handy to have a mobile Windows 8 device of this size. 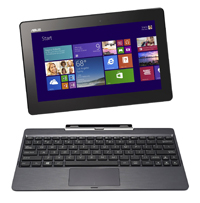 Models: 64GB SSD or 32GB + 500GB in dock
Operating System: Microsoft Windows 8 (full version)
What’s it good at: Lightweight, Productivity, Full Windows Functionality, Inexpensive
What’s it bad at: Ease of use, Design feels cheap (because it had to be)
Price Range: $349-379

Summary
On its surface (pun intended), the ASUS Transformer T100 is the best value of the bunch – using the latest-generation Intel Atom processor (similar to netbooks from years ago), this tablet does it all – it has full Windows 8 functionality meaning you can install any Windows application plus it includes Microsoft Office Home & Student Edition plus the keyboard.

So, with all of the good (and there’s a lot of good), what’s the bad? Well, without mincing words, the design feels cheap. Although this kind of makes sense since the T100 includes $240 of free software in a package that can be had for as low as $349, the tablet is made of plastic and feels a little like you’re holding the top-half of a notebook computer in your hands. In addition, the widescreen form factor makes the 10.1″ screen feel narrower than you might be anticipating with less screen real estate than an iPad or even a Surface.

That being said, the T100 is a very, very cool solution: the keyboard folds closed with the tablet to create a clamshell device (like a notebook/laptop) or you can remove the keyboard and use the tablet by itself with a virtual on-screen keyboard. Keep in mind, you won’t feel comfortable tossing the T100 on your bed like you might with the iPad or Surface. The T100 feels like a device you need to be gentler with much like a traditional notebook PC.

If you’re looking for a tablet that provides inexpensive productivity and can be a true laptop replacement (no games besides Minecraft on this puppy) and you don’t care about a really solid-feeling design, then you can’t go wrong with T100. In addition, I personally love ASUS as a company; their products (and they make virtually everything from motherboards to full-fledged computers) tend to be solid, reliable and feature-loaded.

What do I have? I’ve purchased several of these devices for clients but do not have one of my own. Full disclosure: the very first T100 I bought had a defective power button, but that seems to have been a one-time fluke as all future orders worked perfectly. For a full notebook solution, nothing replaces a full notebook for me. I run CPU-intensive apps like Adobe Photoshop, InDesign and Lightroom, so I need a full iX processor, the Atom won’t do. That being said, for the majority of users, an Atom processor may be powerful enough. 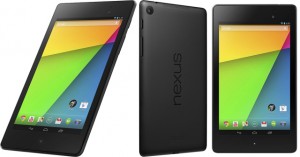 Initially, when I wrote this blog, I was anti-Android because I didn’t like it at all for phones (and still don’t). Well, it turns out that Android’s a pretty fantastic operating system on a tablet. In addition to performing the general tasks of surfing the web, checking email, and streaming Netflix, Android allows the user to configure the operating system to his/her heart’s content. For me, that meant copying every single Super Nintendo and Sega Genesis game on to the tablet, buying a Bluetooth controller, and playing some serious 16-bit action right there on my tablet.

This kind of in-depth configuration can be a little overwhelming to some, but you can ignore it if you don’t like it. If you’re still intimidated by the configuration, I would recommend considering Apple’s products instead.

Overall, I am seriously impressed with my Google Nexus 7 – it’s lightweight and it’s about the size of the iPad Mini. As far as tablets go, I don’t use many apps, and the Google Store had all the Android versions of my favorite apps – MyFitnessPal, Netflix, Zinio (for digital magazines), ComicZeal (for comic books) and many more. In addition, I was able to pick up a brand-new Nexus 7 for under $170. When you look at the iPad Mini ringing in at $129.99 more for the base model, it’s hard to argue that the Google Nexus is a bargain.