Should I buy a Pebble smartwatch? 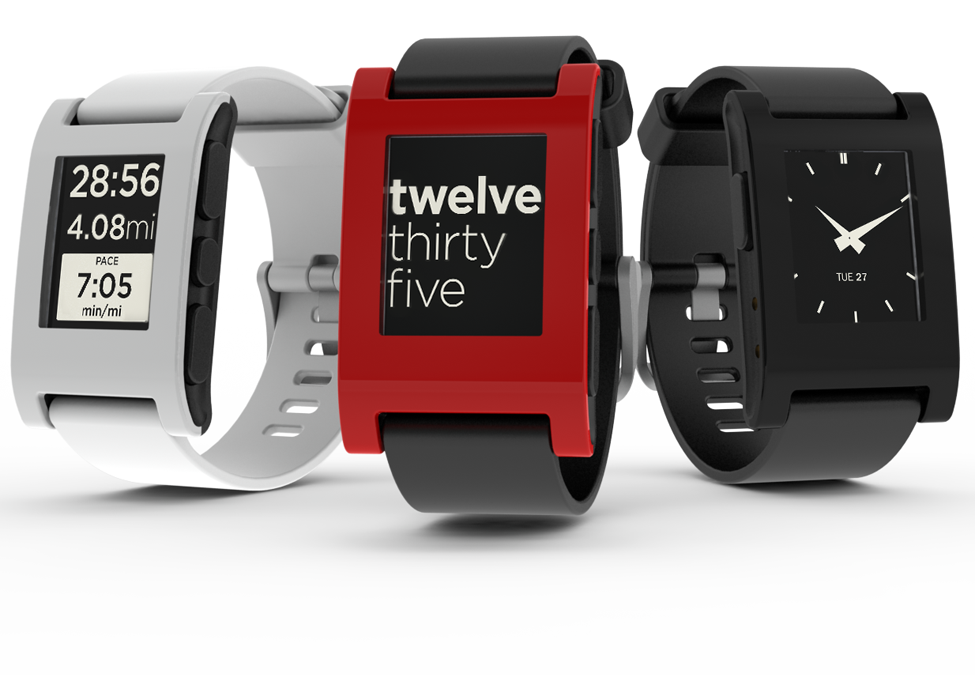 This Pebble smartwatch makes a heck of a lot more of a splash than just a ripple.
Originally written October 18, 2014 – Updated November 8, 2014

Back in May 2012, a small company called Pebble used Kickstarter to create a dream – a customizable smartwatch that could communicate with iOS and Android devices to perform a variety of tasks including displaying text & email messages, showing different watch faces, and controlling your phone’s incoming calls. I had the opportunity to jump in at the start but passed on it thinking I wouldn’t have any need for a watch since I already owned a smartphone. Now that the base Pebble’s price recently dropped below $100, I figured I’d give one a shot, and, boy, was I wrong about Pebble – it has brought the biggest transformation to how I use technology since I bought the original iPhone seven years ago.

What exactly does a Pebble do? 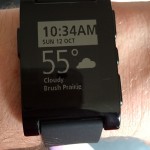 Time, date, GPS-based weather, all on your wrist? Who could ask for more?

The Pebble (and its “,” more expensive brother, the Pebble Steel) connect to your iOS or Android phone using Bluetooth. Through that connection, Pebble streams data from the Internet to power apps from the Pebble app store including GPS-determined local weather forecasts, text messages, email messages, fitness trackers, watch-based GPS, Yelp, and much, much more. The Pebble does all this through a simple and incredibly intuitive four-button layout: a big “Back” button on the left side of the watch and up, select, and down buttons on the right side of the watch.

Why would anyone want a smartwatch in addition to their phone?

When smartwatches started showing up on the scene, I didn’t get it. Why would I want a watch when I already had a phone doing all the same things? Why would I want yet another device whose battery would die on a nightly basis? What could a watch possibly do for me that my phone didn’t already do?

I bought the Pebble fully thinking I would be returning it virtually unused within a week. After a single day, I experienced a paradigm shift so jarring that it was akin to switching to cable Internet from dial-up; getting my first iPhone; or the first time I ever used my ReplayTV DVR to record television and watch it on my own terms without commercials – the Pebble really is that big a deal.

Let me paint a picture of my first day with the Pebble: I took a trip to Costco, my local big-box retailer, on Sunday around noon. If you haven’t seen Cirque du Soleil perform while you’re drunk as a skunk after taking a handful of Benadryl, then you really have no point of reference for what my Costco looks like on the busiest day of the week at the busiest time of that day. “Total, utter monkey-squawking madness on a crashing propeller plane being eaten by a Tyrannosaurus Rex” doesn’t adequately describe exactly how nutty this scenario truly is.

While pushing around my shopping cart dodging zombies in go-carts and small children bent on throwing themselves to their deaths beneath my cart’s steel wheels, my wife sent me two separate texts asking me to pick up almonds and strawberries. There was no fumbling around in my pocket to pull out my ridiculously-giant iPhone 6 Plus (my review of this new phone will be coming soon and it’s a long story but I will give this spoiler: I recommend the smaller 6 model). Instead of going through the utter torture of grabbing my phone and possibly being killed by a retiree whose outdated glasses’ prescription didn’t allow him to see me before running me down, I simply glanced at my wrist, saw my wife’s texts, and went about my business.

A few minutes later, my Mom called. I love talking with my mother, but I’m not about to do it in a busy Costco where I could possibly be killed by a falling two-pack of caskets. Once again, instead of answering the phone, I glanced at my watch, saw that my Mom was calling, and sent the call to my voicemail with a single button push, all while keeping a hand on my shopping cart and safely dodging flying boxes of migrating diapers.

After successfully surviving the Dante’s Inferno that is Costco (I’m a proud shareholder of their stock, by the way), while driving home, another text came in. Yes, yes, you should never text while driving, but while wearing a Pebble, you can read a text as easily as glancing at your phone to check the time. In addition to texts, you can set your Pebble to send any kind of notification to your wrist – CNBC headlines, Experal app feeling-checks – you can even read incoming emails on your wrist, all without taking your phone out of your pocket! 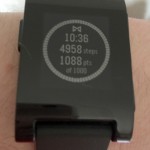 During the week, I used the watch’s Misfit app to track my steps which fed directly into MyFitnessPal and also interfaced with Apple’s new (and horrible – again, a story for a different review) Healthkit apps. All of this without having to do anything at all – the Pebble just works. In fact, it’s so simple, effective, and intuitive that it’s downright shocking the Pebble isn’t an Apple product (simply because Apple’s usually known for that kind of thing, not because I love Apple – once again, just hold out for my iPhone 6 Plus review).

Smartwatches are a supplement to smartphones that I never anticipated needing. A need I always had but never realized was there. The Pebble has entirely and completely changed my mind – I’ve gone from not wearing a watch in nearly seven years to not being able to live without my Pebble – and it’s only been a single week.

Speaking of Apple, how does the Pebble differ itself from the upcoming Apple Watch?

By now, you’ve heard that Apple, the giant tech company that overwhelms everyone and threatens them with tablets so light that they’ll blow away in a stiff breeze, is entering the smartwatch fray in early 2015 with its own Apple Watch. With a sapphire-glass full-color LCD screen and what will inevitably be an abundant app store, the Apple Watch will certainly give the Pebble a dangerous run for its money. 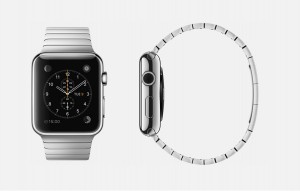 Apple’s Watch (coming “early 2015” ) brings with it a better design, a full-color screen, but also a suspicious lack of mention of battery life

Herein lies the Pebble’s secret weapon: it doesn’t use a battery-sucking LCD screen, it uses a low-energy e-ink face. Granted, that means just black and white with no color, but it also means one key advantage – longer battery life. I’m not talking just a full day’s use between charges – I’m saying I’ve put the Pebble under very, very heavy use and I’ve only needed to charge it once every three to four days.

Although Apple hasn’t yet announced the expected battery life of its watch, there were several mentions of just how easy it will be to charge the watch when it comes out during their announcement keynote. Talking about how easy it is to charge your device is like telling someone “I’m not lying to you…” before saying something. Why are you telling me you’re not lying? Do you usually lie? Apple, how often will I be charging your Apple Watch with its “incredibly easy magnetic charging device?” Once a day? Once every few hours? I don’t care how gorgeous it is, if the battery life doesn’t last more than an entire day, the recharging process is going to get really annoying in a really big hurry.

In addition, the pricing for an Apple Watch is starting at $349 comparatively to the Pebble’s now very reasonable $99 pricing for its base model. And, I just know that the Apple Watch I will want won’t be the base $349 model. For me, I’m guessing my Apple Watch of choice will be around $549-599 since I will want the bigger screen and the more resilient glass.

So, the Pebble is a minimum of a $250 savings over the base Apple Watch, plus, wait for it, you can get yourself a Pebble today (right now, in fact). 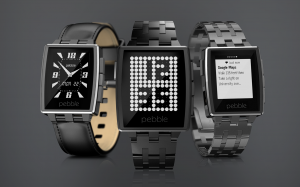 But, but… the Pebble is so freaking ugly.

Whereas Apple has once again designed a beautiful piece of equipment in its first-generation smartwatch, the Pebble is polarizing – you either love it or hate it. For me, it vaguely reminds me of the hideous Casio calculator watches from the 1980s (holy crap – you can still buy these things!). That being said, I’m willing to suffer Pebble’s mediocre industrial design for the wealth of hard-hitting functionality it brings to my life at such a reasonable price.

UPDATE, 11/8/2014: I recently purchased a Pebble Steel to check out the differences between the regular Pebble and the Steel version. I can’t remember the last time I’ve been this disappointed. The Steel brings nothing new to the ball game: the design is basically the same (despite advertisements to the contrary), plus Pebble has pulled the second watch band (ironically, the steel version) out of the box, only including the leather band in the box while charging an additional $19.99 for the metal band. The leather band of the Steel has the tendency to regularly pinch the skin on my wrist and will likely mold if I try wearing it while working out, unlike the waterproof rubber version of the original Pebble. The metal watchface with the Gorilla Glass wasn’t impressive. In fact, the metal watchface of the Steel seems bigger than the regular Pebble, more ungainly, and, if possible, even less attractive than its half-off little brother.

In my opinion, the regular Pebble at $99.99 is a feature-packed bargain that will almost certainly change your life – the Pebble Steel is an overpriced disappointment that demonstrates overengineering and “higher-quality components” aren’t always good things to have. If you’re interested in the Pebble, go with the regular version and skip the Steel completely.

If you have an Android or iOS device and are in the market for an affordable smartwatch that might just blow your mind, try the Pebble. It’s as downright amazing as it is totally hideous, but you can’t have love without hate, right?