Should I buy a Fitbit?

The idea of wearable technology that could track my fitness seems brilliant – who wouldn’t want a device automatically helping you figure out your health by tracking your activity levels plus your sleep patterns that syncs with both your computer and your smartphone?

I decided to investigate the Fitbit Flex, one of Fitbit’s tracking devices that you wear on your wrist which tracks your physical activity, sleep patterns and syncs with your smartphone and computer. Fitbit sells other models, too (pictured above), however they all operate in relatively the same fashion so I feel this review applies to all of them.

I work out six days a week. For four days, I use an elliptical trainer and weight training. On two days, I do Pilates and use a treadmill. I thought since the Fitbit tracks the number of steps I take, that it would work on the elliptical trainer – not so much. The machine tells me I ran 3.5 miles while my Fitbit says I walked 2.4 miles.

Although the treadmill was far more accurate since I was running, I also want credit for the other workouts I’m doing such as the Pilates and weight training. There’s nowhere to enter those activities into the app, so you just have to do it for staying healthy (which you should, but it defeats the point of the Fitbit, am I right?) 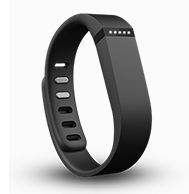 Before you go to sleep, you set the Fitbit into sleep mode by tapping it for 2-3 seconds. This mode switching works easily enough and the Fitbit gives you a summary of your night’s sleep patterns separated into three categories – sleeping, restless and awake. Sounds good, right?

So, what’s the problem here? I have a floofy cat (appropriately named “Floo” – you can follow his Facebook fan page by clicking here) who enjoys singing the song of his people on a daily basis around 4:45 a.m. He wanders into my bedroom and meows his floofy little head off until I wake up, get out of bed and punt his floofy butt out of the room.

Every night I wore the Fitbit, Floo came into the room and performed his show causing me to get out of bed and remove him from the premises. The Fitbit tracked NONE of these occurrences. In fact, the Fitbit showed that I wasn’t even restless (much less awake), acting as if I slept through the entire night.

The Fitbit apps includes a Calorie Tracking Diary with an extensive database of different foods and calories. This is a nice feature, however since you need to add your calories manually, I expect many Fitbit owners wouldn’t use this feature.

In addition, there are many Smartphone apps like MyFitnessPal’s Calorie Counter app for iPhone, Android, Blackberry and more, which have much more extensive food databases and can be downloaded for free or very cheap.

I know what you’re thinking: “‘Not motorcyclist compatible?’ Um… what?” Yes. I ride a cruiser and whenever I rode my bike while wearing the Fitbit, the vibrations going through my wrist would make the Fitbit change into Sleep Mode which would mess up my sleep tracking by making the Fitbit think I was taking a little catnap while riding my two-wheeled death machine. (In case you’re curious, no, motorcyclists cannot sleep while riding).

The Fitbit is a very neat idea for wearable technology that’s not quite ready for prime-time. If Fitbit can develop a tracker that more accurately tracks all kinds of activity including physical and sleep, maybe I’ll give it a try.

For right now, unless you’re an early adopter who tolerates a lot of deficiencies in a device just to have the newest technology, I recommend waiting until Fitbit fully bakes their concept.

I always like hearing other opinions. If you disagree (or agree) with my Fitbit review, feel free to leave your comments below. Remember, keep it clean and polite or your comment will never see the light of day.